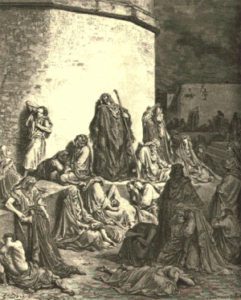 Eikha, read on Tisha beAv, is Jeremiah’s painful cry over the enormous tragedies associated with the destruction of the first Beit Hamikdash: the loss of Jewish sovereignty, the massive death toll, the wholesale and forcible dislocation of the Jewish people from its land, and the terrifying sense of abandonment by God. It is hard to know which of these is worst, and all feature at some point in the Eikha text. Using powerful imagery, the prophet personalizes the city of Jerusalem mourning painfully and all alone – without a friend in the world – for her children, her former inhabitants, for her eerily silent empty streets, her unemployed kohanim, her traffic-less roads, and her street-performers longing for someone for whom to perform.

The prophet opens by describing Jerusalem as a widow – formerly a high society woman of elegance, wealth and status with a coterie of friends, well-wishers, and admirers, not to mention a perfect family – who is left with absolutely nothing. Her children are gone, her supposed friends have not only abandoned her but  mock her dramatic downfall; she has no one interested or capable of comforting her, she weeps through the night and finds no solace or dignity during the day. The Rabbis (Gittin 56a) picked up on this image in their description of Marta bat Boethus, a Second Temple Jerusalem aristocrat, who, in the middle of the siege of Jerusalem, sent out her servant to buy some fine flour. He returned empty-handed, as all the fine flour was gone from the market. She sent him out again for a lesser quality flour, and he returned again empty handed. She sent him out again and again, each time reducing her demand for quality, but he repeatedly returned empty-handed, reflecting the intensifying food shortage. Ultimately there was nothing left, and as she went to forage for herself she stepped barefoot on something disgusting and died.

Jeremiah’s widow is moving, but is still insufficient to describe his pain. He thus introduces a new metaphor, that of a niddah (menstruant woman). Far from our current, sanitized, sterile world in which such matters are kept private and intimate, the description in Eikha is public, graphic, and demeaning. She is exposed to all as her blood-stained skirt reveals what she cannot hide. The powerful imagery underscores the prophet’s message – Jerusalem’s downfall is not superficial, it is merely the external sign of a process of moral decay which lay hidden from the eye for so long but can no longer remain secret.

As in the days of Zekharyah (a late prophet who lived through the beginning of the return to Zion and the initial rebuilding of the Beit Hamikdash), many in Israel today struggle with Tisha beAv. Are not the cities of Israel teeming with the children who have returned home? Is Jerusalem not a glorious city with more inhabitants than at any point in all of Jewish history, where there is a flourishing of Torah learning, art, music, festivals, free-loan societies, architecture, parks, and so much more? Where children are born and grow to a ripe old age and enjoy their own grandchildren playing in the streets, literally and figuratively fulfilling Zekharyah’s vision (Zekharyah 8:4-5)?

Though I understand those who question the need to continue to commemorate Tisha beAv, I can’t get Jeremiah’s images out of my head. Looking outward, is Israel the darling of the world with everyone knocking at her doorstep, a model for the nations held in high esteem, or is she still delegitimized, mocked and derided on campuses, in the halls of the United Nations, and on the streets throughout the Western world? Looking inward, is Israel an expression of the ideal of a Jewish state, or do we have a long way to go? Do we not need to hang our heads low for the seemingly endless parade of high-ranking politicians, businessmen, and rabbis sitting in jail or under investigation for a range of crimes and abuses? Do we not live in a world of protektzia in which it matters not what you know but who you know? Do we not have a permanent (and growing?) underclass, and bureaucracy which would make the Byzantines proud? Are we not home to a significant Jewish population which refuses to identify with, participate in, or contribute to the rest of society?

Jeremiah’s images of the lonely widow and the niddah whose external stains reflect the internal one, are, unfortunately, still very relevant. I pray for the day that we can put them in the Museum of Past Jewish Suffering, a museum dedicated to reminding us of the world that used to be but no longer is. It is in that Museum that we will make mountains of our Kinot books and where visitors on Tisha beAv will be greeted with dainty snacks and assignments to help improve the world in which they live.

Rabbi Dr. Zvi Grumet is a master educator and Tanakh scholar living in Jerusalem.  His book, From Creation to Covenant is published by Maggid.